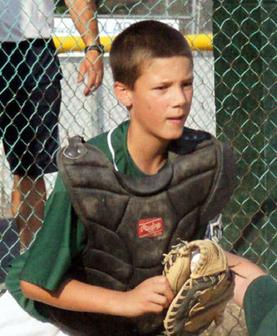 On June 9, 2011, after two weeks of unexplained headaches, nausea, and vomiting, an MRI revealed a mass in Eric's brain. Eric endured his first brain surgery on June 14, 2011. It was after this surgery that we were informed that Eric had brain cancer, specifically a grade three Anaplastic Ependymoma.

Eric went on to receive six weeks of Proton therapy, which is a form of radiation therapy, at the Children's Hospital of Philadelphia. The post radiation MRI revealed a healthy, "normal" brain. Unfortunately, our relief was short lived. In April 2012, a routine MRI revealed a recurrence of disease. We had decided at this point that it was time to turn to a hospital that strictly dealt with cancer.

Eric began a chemotherapy clinical trial at Memorial Sloan Kettering Cancer Center in NYC shortly after this recurrence. He began with a clinical chemotherapy trial to try and shrink the tumor, but this failed. Eric underwent his second brain surgery just two weeks before his 13th birthday. After surgery, he underwent another six weeks of standard radiation to his brain.

Three months later a post radiation scan revealed another recurrence in a different area of his brain. In October of 2012 Eric had his third and final brain surgery. This surgery was done to remove the new tumor and also to place an Ommaya reservoir in his brain, which is a special port that would be used to inject a special radiological antibody into Eric's cerebral spinal fluid. This was also a new clinical trial.

In late January, we found that Eric's disease had again recurred. Again Eric underwent more radiation with no change. He went on to join three more clinical trials in the hopes that one of these would finally kill the relentless disease.